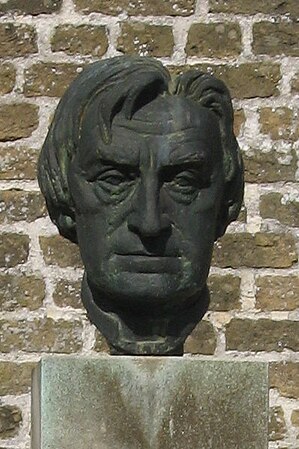 Cyriel Verschaeve (30 April 1874 – 8 November 1949) was a Flemish nationalist priest and writer who collaborated with the Nazis during the Second World War. He was recognised as the spiritual leader of Flemish nationalism by the ideology's adherents and a Nazi propagandist.

Born in Ardooie in West Flanders, Belgium to a Catholic family, he began training to be a priest at the minor seminary in Roeselare in 1886, before moving on to Bruges in 1892 to complete his studies. He was ordained in 1897 and then continued his studies at the Friedrich Schiller University of Jena in Germany.

He returned to Belgium in 1911 to become a parish priest at Alveringem in West Flanders. Whilst here he became involved in the pacifist movement after the outbreak of the First World War. He also was involved in the development of the Frontbeweging, a Flemish a…Read more on Wikipedia

Work of Cyriel Verschaeve in the library